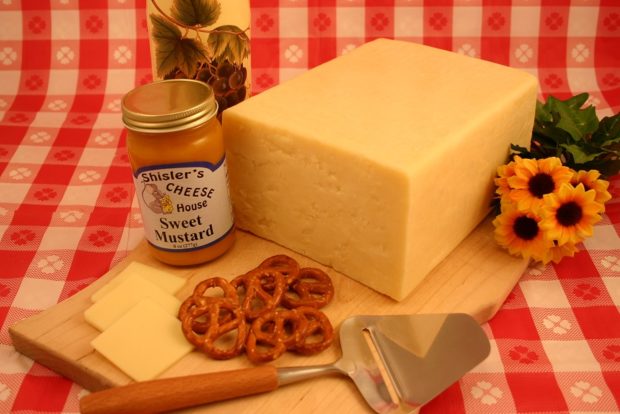 Cheddar, made in the classical way, tends to have a sharp, pungent flavor, often slightly earthy. Its texture is firm, with farmhouse traditional Cheddar being slightly crumbly. The ideal quality of Cheddar was described by Joseph Harding in 1864 as “close and firm in texture, yet mellow in character or quality; it is rich with a tendency to melt in the mouth, the flavor full and fine, approaching to that of a hazelnut.”

Our other cheddar products include milder white and Orange Cheddars.  We also carry flavorful variations of Cheddar including Smoked Cheddar. Garlic Cheddar, Horseradish Cheddar, and Bacon Cheese.  We even have fresh cheddar cheese curds which have become increasingly popular in recent years.

he sharp and pungent flavor of Cheddar pairs well with Zinfandel, Syrah, and Merlot red wines.  White wine lovers can enjoy Riesling, Pinot Gris, or Sauvignon Blanc with their Cheddar.  The most sophisticated palates will pair their Cheddar with fine Port, Madeira, or Brandy.  Cheddar also pairs well with Pale Ale, Porter, or Stout for beer aficionados, and even ciders and fruit beers for those with a more delicate palate.  It can even be enjoyed with good Scotch.