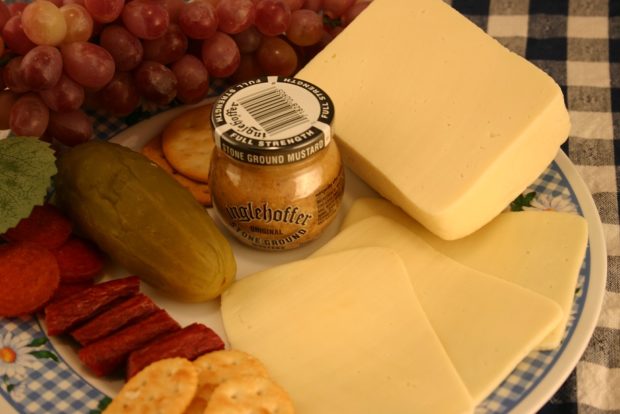 Brick Cheese is made in the form of a large rectangular or brick shape, but may also be named “brick” because the cheese curds are pressed with clay-fired bricks. The color ranges from pale yellow to white, and the cheese has a sweet and mild flavor when young, and matures into a strong ripe cheese with age. It is medium-soft, crumbles easily and is somewhat sticky to the knife. Brick Cheese is well suited to slicing for sandwiches, specifically grilled cheese sandwiches, or appetizers and also melts very well. Brick Cheese is often served with corn polenta in the Midwest, where it is thinly sliced and melted underneath the polenta and then topped with tomato sauce.

Brick Cheese is actually an American original produced in Wisconsin. The cheese making process was derived from white American Cheddar that is cultured at a slightly higher temperature which results in a marginally higher fat content and a slightly altered protein structure. The resultant brick cheese has a slightly softer taste and a distinctly sharper finish.
Brick Cheese was created in 1877 by John Jossi, a Swiss-born American cheese maker.  Jossi came to the states in 1857 from Switzerland with his parents at the age of 12. The family settled first in upstate New York, but later Jossi moved to Richwood, in southwest Wisconsin. He envisioned a cheese made with curd that was drier then that used for the Limburger he had produced in the factories he worked in.  He came up with the idea of using bricks to press the cheese, which of course was formed into a brick shape. Beaujolais, Pinot Noir, Merlot, and Syrah are all good red wines to pair with brick cheese.  White wines, such as Chardonnay and Sauvignon Blanc pair well with brick cheese. Brick Cheese is also a popular choice for beer lovers as it pairs well with Bock, Lager, Porter, or Stout.

Be the first to review “Brick Cheese” Cancel reply