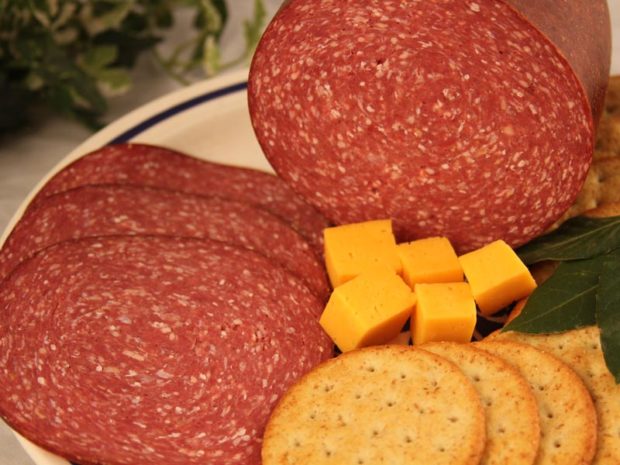 Description of Sweet Lebanon Bologna
Lebanon bologna is a type of cured, smoked, fermented, semi-dry sausage. This all-beef sausage similar in appearance and texture to Salami, although it is somewhat darker colored. Lebanon bologna has a distinct “tangy” flavor, more so than other fermented meat products such as summer sausage. Hardwood smoking imparts a strong “smoky” flavor to the traditionally prepared versions of  Lebanon Bologna.

Our manufacturer’s Lebanon Bologna starts with the highest quality lean beef, carefully ground and cured with aromatic spices. They do not add any water or fillers to the product. Each bologna is then slowly smoked over natural hardwood fires in century old outdoor wooden smokehouses to create the distinctive delicious flavor that they are famous for.
History of Sweet Lebanon Bologna

Originating with the Pennsylvania Dutch, Lebanon bologna was developed with heavy influence coming from slow-cured sausages of Europe. It is commonly available throughout Pennsylvania and is often served as a luncheon meat. It is named for the Lebanon Valley of Lebanon County, Pennsylvania, where it is most commonly produced. You search of where to buy Sweet Lebanon Bologna ends here !

Be the first to review “Sweet Lebanon Bologna” Cancel reply