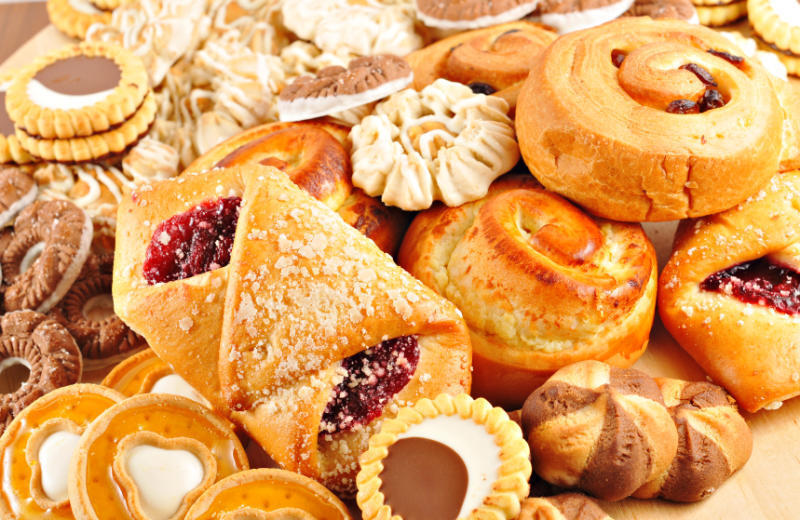 Hot Cross Buns used to be available during Easter time, as they symbolize the religious event that Easter is. They’re stacked with currants and have a cross to symbolize the crucifixion. They also contain a number of spices to represent the embalming process prior to the burial. You may get your fingers sticky, but these tasty buns are definitely worth it!

This small egg custard tart is one of Portugal’s favorite snacks. It was first baked by monks at the Jeronimos Monastery in Lisbon. It was made quite by accident, or as an experiment, the monks had too many egg yolks left over after separating the egg whites to starch their clothes, so they came up with the delicious egg custard.

There are many varieties of panforte in Italy. They usually consist of densely-packed nuts and dried fruit, with a pinch of cinnamon, pepper and even sometimes alcohol! They are then baked into a loaf, and then covered in chocolate. This baked good is very filling, so a little goes a long way. It is said that it is a modern-day take on medieval sweetbread.

If you find yourself in China anytime soon, you will definitely want to try their Chinese Mooncakes! It is a pastry crust stuffed with red bean paste or lotus seed paste. They seem to be more than a tradition than a delicacy as it is reported that around two million mooncakes are thrown away each year! What a waste!

Originally from Lombardy, this sweet brioche loaf can be great for Christmas time but does come in many different varieties to suit all seasons. It ca be dusted with powdered sugar to being dotted with dried fruit or chocolate. Panettone is known for its dome shape, it may have the texture of brioche but its leavening process is a lot more complicated because an acidic cure is used to make it more akin to sourdough than a traditional cake.

This beauty was popularized in the 18th century Habsburg Empire. The pastry is filo and is layered with sliced apples. Back in 1696, the original was actually layered with turnip- so glad they switched to apples; it tastes much sweeter and nicer!

You might not be able to tell whether it is a pie or a cookie. New England Whoopee Pies are a mixture of both. It usually consists of a gingerbread or chocolate soft cakey top and bottom with a creamy filling. They might possibly be the fanciest Orea look-alike you ever see! It is argued among New England and Mane about who invented it, but either way, it is a delicious delicacy!

This tasty treat is made from a rice flour pastry baked in a clay pot lined with banana leaves and it is dusted with coconut! Making it can be more complicated than eating it, that’s for sure, but it is definitely worth it!

The Potica is Slovenian’s national pastry. It is a favored centerpiece for holiday meals or special occasions. This baked good is normally filled with ground walnuts on a really large sheet of pastry that is rolled and then jiggled from one corner into a tight serpent-like shape. It is then laid into a terracotta Bundt pan to bake. Usually, it is served in slices.

The name ‘German Blitzkuchen’ sounds a lot fancier than what it actually is- coffee cake. Nevertheless, it’s one of the best coffee cakes you’ll ever try! It’s quite bizarre how coffee cake doesn’t actually have any coffee in!

The translation of this baked good is “Golden Coffee Cake”, it is traditional to have on birthdays, but can also be a popular choice for a dessert smorgasbord. you may wonder why a coffee cake is being classed as a baked good rather than a cake. Well, this is no ordinary coffee cake, it is twisted like a pretzel and has flavors of almonds and saffron and cardamom.