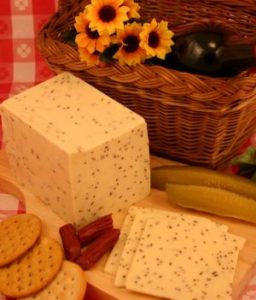 Pule is made from the milk of the Balkan donkey from Serbia. It costs a whopping $600 per pound, making it the most expensive cheese in the world! 25 liters of milk is used to make just one kilogram of the cheese. Low in fat, but high in vitamins and proteins, this cheese is said to boost the immune system. If you want to get your hands on a piece of this cheese, you have to order it as it isn’t available on the market!

This cheese is only slightly less expensive than Pule, coming in at $420 per pound. It is a British cheese that comes under a Protected Denomination Origin. It is a soft white cheese, rather than the blue of traditional stilton, and is actually made with real gold.

Another British cheese! Cheddar is often aged in caves and this expensive version is made in Somerset, in the south west of England. It is $200 per pound and, despite its incredible price, very popular. It is matured for at least 15 months and has both creaminess and nuttiness. The exact method for making it is a closely guarded secret.

This is a cheese sold exclusively in China, where you can find some of the oldest and most expensive cheeses that the world has to offer. It is aged for up to 10 years and costs around $120 per pound. It originated in Italy, where it is sometimes known as Bitto Storico. There are only 12 producers of this expensive cheese.

Another cheese of Italian origin, its name means ‘horse cheese’. However, it is not made from horse’s milk. The name, in fact, refers to the practice of horses carrying the cheese as it cured. The cheese would be suspended from the horse, almost like saddlebags. It is made from the raw milk of a rare breed of Italian cow called the Podolica. This cow spends some of its life living in the mountains, grazing on nettles, blueberries, rosehips, hawthorn, cornelian cherries, juniper, and wild strawberries. These flavors can sometimes come through in this unusual cheese. It is a hard cheese that is quite dry and sometimes has holes. The taste is described as vegetal and savory inside the rind that forms as it matures for a year.

Which of the world’s most expensive cheeses would you like to try? Have you actually tasted any of them? Let us know in the comments; we’d love to hear all about it!