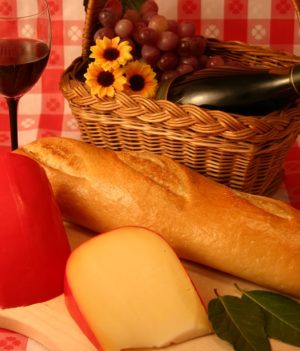 The cheese glossary continues with the letter G! This refers to flavors and aromas which strongly reflect the animal from which the milk came. Goat’s cheese, for example, is often described as gamey.

The parallel cracks that appear in Swiss cheese with no eyes.

Gouda is a yellow cow’s milk cheese with a red or yellow wax coating. It is made by culturing and heating the milk until the curd separates from the whey. Some of the whey is then drained, and water is added. This is called “washing the curd”, and creates a sweeter cheese, as the washing removes some of the lactic acid. As it ages it develops a caramel sweetness and sometimes has a slight crunchiness from salt-like calcium lactate or tyrosine crystals. Gouda was named for the province in south Holland where it was originally developed.

A descriptive term for the gritty texture which is desirable in certain hard-grating cheeses, such as Parmesan and Romano. It should not go so far as to be mealy. Grainy can also describe a wheat-reminiscent taste found in some cheeses.

This comes from the Italian word for grain and refers to a group of hard, grainy cheeses. These include Asiago, Grana Padano and Sapsago.

Gruyere (groo-yair) is one of our favorite imported cheeses.  Some call it a French cheese while others insist it is from Switzerland.  It originated in the Alpine region between Switzerland and France in the eleventh century. It was named after the town of Gruyères in Switzerland, and originated in the cantons of Fribourg, Vaud, Neuchâtel, Jura, and Berne. Before 2001, when gruyere cheese gained Appellation d’Origine Contrôlée (AOC) status as a Swiss cheese, some controversy existed whether French cheeses of a similar nature could also be labeled Gruyere cheese. French gruyere-style cheeses must have holes according to French agricultural law, whereas holes are usually not present in Swiss gruyere.

Gruyere Cheese is sweet but slightly salty. It has a flavor that varies widely with age. It is often described as creamy and nutty when it is young, becoming more assertive, earthy, and complex. When fully aged, after five months to a year, it tends to have small holes and cracks which impart a slightly grainy mouthfeel. It is a good melting cheese.

As always, let us know if you have any questions or words for us to define in the cheese glossary in the comments below. We hope that this series is helping you to learn more about cheese. If you ever have questions that need a more in-depth answer and you are local then do pop into the store. We always love to have a chat about cheese with our amazing customers!