We love teaching you about cheese at Shisler’s Cheese House, so today we are here to tell you all about sharp cheeses.

The term “Sharp” denotes a stronger flavor as a result of a longer aging process.  Many cheese connoisseurs prefer sharper, more mature cheeses. Some of our more mature cheeses include Asiago, Canadian Cheddar, Manchego, Parmesan, Romano, Sharp American and Sharp Swiss. Our Orange and White cheddars are both medium sharp cheeses. Our Sharp American Cheese is produced in Wisconsin along with our Muenster, Brick, Limburger, and Beer Cheeses. American Cheese is orange, yellow, or white in color and mild in flavor, with a medium-firm consistency, and melts easily.  It has traditionally been made from a blend of cheeses, most often Colby and Cheddar. This is particularly great on cheeseburgers, in grilled cheese sandwiches, and in macaroni and cheese.

It originated when British colonists began making cheddar after they arrived in America. By 1790, American cheddars were being exported back to England and the British referred to them as “American cheese” or “Yankee cheese”. Post-Revolution Americans promoted this usage to distinguish the exports of their proud new nation from European cheese. 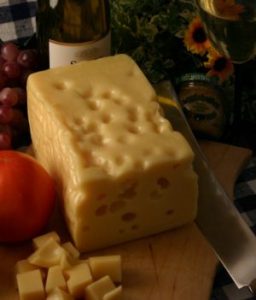 Our Canadian Fine Aged Cheddar is aged for four years. This gives it a sharp, pungent flavor, that is often slightly earthy. Its texture is firm whilst being slightly crumbly. This works well in sandwiches or grated over dishes as it melts well and will impart lots of flavor to your meal.

The best red wines to pair with sharp cheeses are intensely fruity in flavor so that they stand up to the tangy cheese. We recommend a Cabernet Sauvignon. Choose a bottle from two or three years ago to avoid an overly tannin-heavy wine.

Even better than a red wine is a glass of vintage port. This will have both fruitiness and sweetness to pair with your cheese. You could even try a hard cider or a strong ale as these are robust enough too.

These cheeses are all great choices if you are looking for punchy flavors, rather than simply a texture from your cheese. It’s a great idea to include one of these cheeses on any cheeseboard that you serve up as they are sure to satisfy true cheese lovers. They pair particularly well with pickles and chutneys as the taste won’t be overpowered.

If you’re not sure about strong cheeses, why not pop into store to try them soon?

Do you like sharp cheese? Let us know how you like to eat it in the comments!