When thinking of the name “Monte Cristo”, what comes to mind? The Count of Monte Cristo? The Monte Cristo? The quest for the Holy Grail… wait a second, that’s Monte Python! On the tastier side of things, the most tantalizing of these is the Monte Cristo Sandwich. The Monte Cristo is a delicious sandwich served in delis and restaurants across the world. Known for its savory layers of Swiss cheese and ham, turkey or chicken.  This deli delight is far and away a cheese lover’s dream sandwich.

What exactly is the Monte Cristo sandwich? What is the origin of the Monte Cristo Sandwich?

1910s… Most culinary experts believed that the Monte Cristo Sandwich is a variation of a French dish called Croque Monsieur, a grilled cheese sandwich consisting of Gruyere cheese and lean ham layered between two slices of crust-less bread, fried in clarified butter and made in a special grilling iron with two metal plates. Croque Monsieur was served for the first time in a Parisian cafe.

1930s to 1960s… American cookbooks published in this time period showcased this sandwich under a myriad of names including… French Sandwich, Toasted Ham Sandwich and French Toasted Cheese Sandwich, all sounding delicious, but lacking a truly unique sandwich identity.

1966… Disneyland made its contributions to the ever-surging Monte Cristo Sandwich. It appeared on their menu at the Blue Bayou and Tahitian Terrace restaurants in New Orleans’s Square in Disneyland.

Ever since, the Monte Cristo Sandwich has made leaps and bounds in culinary notoriety becoming one of the most delicious sandwiches of our time and finding its place on menus of restaurants, delis, and other sandwich shops, nationally and internationally. 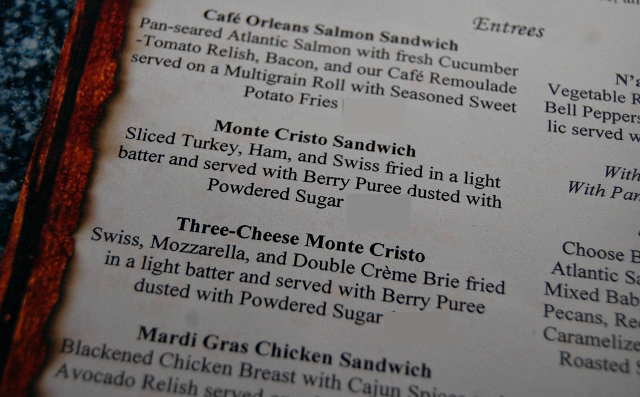 How to make the Monte Cristo…

Thinly spread one side of each bread slice with mayonnaise. Then assemble 6 sandwiches, using 2 slices of cheese, one slice of ham, and one slice of turkey for each sandwich. Trim bread crusts and filling with sharp knife, making edges of sandwiches even; cut each sandwich in half diagonally.

In a shallow dish, beat eggs, half-and-half, and salt until blended. Places sandwiches in mixture and turn to coat; then let stand, turning occasionally, until all liquid is absorbed. Melt about 3 tablespoons of the butter in a wide frying pan over a medium heat. Add as many sandwiches as will fit without crowding; cook, turning once, until lightly browned on both sides. Remove from pan. Repeat with remaining sandwiches, adding more butter to pan as needed.

Place the sandwiches on an ungreased baking sheet and bake in a 400° oven until cheese is melted (3 to 5 minutes). Dust with powdered sugar and garnish with parsley sprigs. Serve hot, accompanied with jelly. Makes 6 sandwiches. 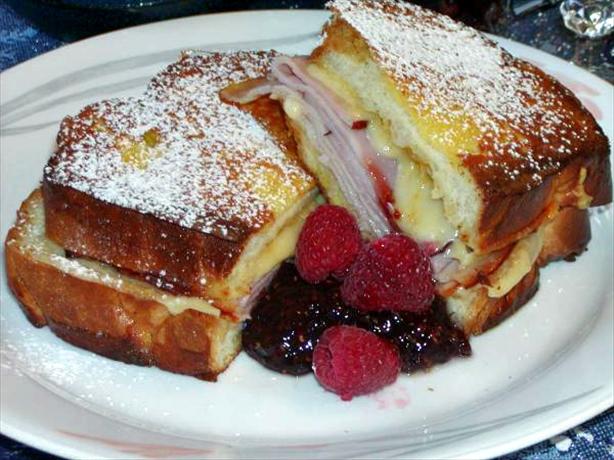