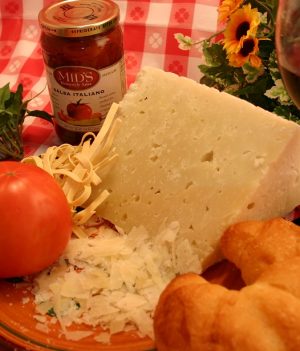 Today we continue our exploration of cheeses of the world with a look at Romano Pecorino. What is Romano Pecorino?

Romano Pecorino is a cheese imported from Southern Italy. It is salty and firm, making it an excellent grating cheese. The flavor of Romano Pecorino is quite distinctive, and it’s an important ingredient in many south Italian dishes. It is sharper than the similar Parmesan cheese. This is one of our newer imports that we have been adding to our selection and will continue to add in the future.

The history of Romano Pecorino

Romano doesn’t refer to Rome the city, but to the Romans, who were already making Romano Pecorino 2000 years ago.

Lucio Moderato Columella, who wrote De Re Rustica, says, “the milk is usually curdled with lamb or kid rennet, though one can use wild thistle blossoms, càrtame, or fig sap. The milk bucket, when it is filled, must be kept warm, though it mustn’t be set by the fire, as some would, nor must it be set too far from it, and as soon as the curds form they must be transferred to baskets or molds: Indeed, it’s essential that the whey be drained off and separated from the solid matter immediately. It is for this reason that the farmers don’t wait for the whey to drain away a drop at a time, but put a weight on the cheese as soon as it has firmed up, thus driving out the rest of the whey. When the cheese is removed from the baskets or molds, it must be placed in a cool dark place lest it spoil, on perfectly clean boards, covered with salt to draw out its acidic fluids.”

Though modern cheese makers use heaters rather than the fireplace and use calibrated molds rather than baskets, the basic process has remained the same. It is a very distinctive technique and this imparts a characteristic salty sharpness to the cheese. Romano Pecorino is made from the milk of sheep that have grazed pastures with specific combinations of grasses so that specific flavors are imparted to their milk.

It’s become a popular cheese around the world, known for its fantastic flavor. Currently, about 20,000 tons of  Romano Pecorino are exported every year, 90% of which go to North America.

It doesn’t melt into strings when it is cooked, making it a great addition to a cheese platter, especially with fruit. We particularly love it with apples and pears. It makes a great snack with a piece of crusty bread and a glass of red wine.

As it grates so well, it’s perfect with pasta dishes, bread, or baked casserole dishes. Pop a chunk of it on the table with a fine grater for guests to add their own garnish.

It also works well in salads, curled into shavings, or grated over soups. We particularly like it with a bowl of rich tomato soup. If you are making pizza at home, you could try using Romano Pecorino in combination with Mozzarella for full flavor. It’s also brilliant in dumplings.

What should I drink with it?

Romano Pecorino pairs well with light red wines such as Cabernet Sauvignon, Chianti, Merlot, and Zinfandel. For a surprising combination, pair it with cider or fruit beer.

How do you eat this cheese? Let us know in the comments below!